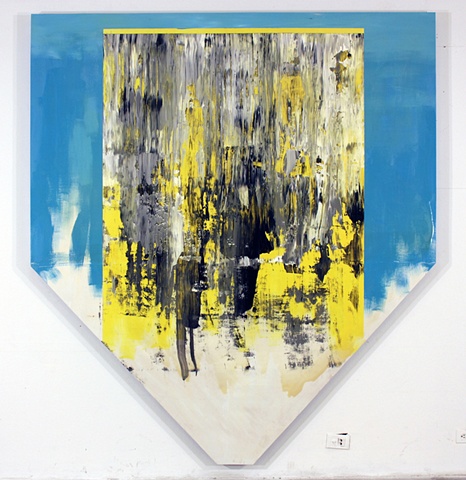 Essay from my written thesis

BARA I have often wondered what it is that draws people to painting. Some of the best painters I have had the privilege of hearing speak talk mostly about the moves they make with the material. Their conversation seems to remain in the realm of what the material can do and how the painting finally resolved when the artist was done with it. I recall David Reed eloquently describing painting. He made me feel as though he truly loved to dance with the material and that when the dance was over the results equaled both evidence of his touch and fine-tuning while the painting retained a sense of itself. In that respect “Painting” was not done being involved with. It still called for more touch. It seemed to me as though this was the same “Painting” Pollock must have danced with or O’Keefe, Guston, Park, Velázquez or Angelica. It is as if painting really is a monolith that will dance with any who choose to engage with it. That it will never be fully commanded by the artist, but always somehow present itself as it always has, until it is done, until the painter is done. These ideas of a timeless thing that invites the imprint of our hand while still remaining fully itself became partly the influence for the painting “BARA.” BARA is the Hebrew word “for made out of nothing or no thing” or “to fatten.” In the Hebrew language there is no exact translation for our English word “create” but “bara” is a close term to it. In that respect this piece initiates the beginning of Kingdom Compossible. I painted BARA in a manner that reflects finite density as I have studied it regarding the Kalam cosmological argument. In sync with the ideas of this piece is a large chevron/home-plate shaped panel with a single luminous central and dense space. The work was made to resist quick or easy references. It is reliant upon the effects of grey and black scraped several times across an intense yellow space, while the wedge form emphasizes a downward overall force through the narrowing of the shape. The interior acts contrary to the shape by conveying an upward-ness sustained through the rectilinear painterly-effects going on in the middle. The middle of the painting is then framed by an expansive sky-like blue space on equal sides, which in and of it self is frontal and tending towards atmospheric in effect.

The wedge shape has been in several of my most recent works. I began to think of it in relationship to the analogy of “ inch deep miles wide” as a way of explaining a thin worldview, meaning a worldview one could not leap out of based on the width being miles wide. Yet because of its thin nature one might be able to wedge a way through to a deeper, true and preexisting base. In that respect the wedge, in contact with the preexisting base could allow for substantial and sustaining outward growth while recontextualizing the thin worldview. It is for this purpose that the shape of the painting was made top heavy with a piercing bottom, employing an up-down visual reference. BARA carries a central force while also looking to accommodate the objects made in conjunction with it.